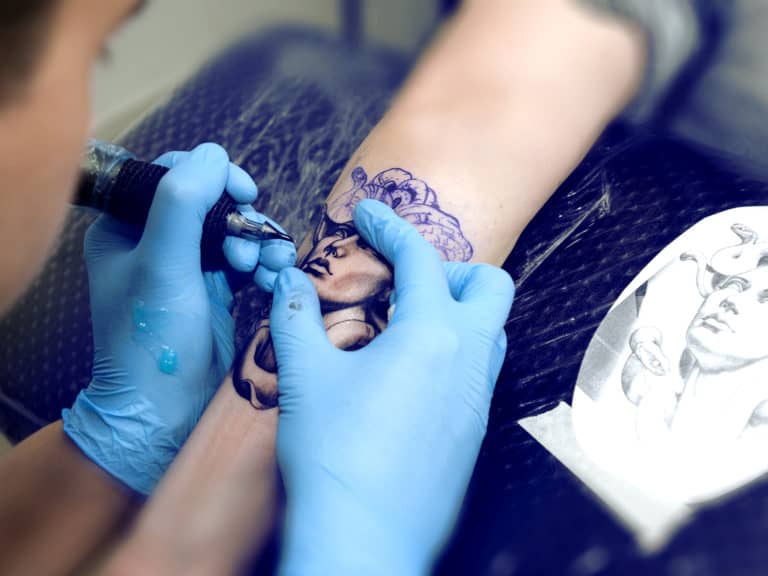 When opting for body modifications such as a tattoo, it’s important to keep in mind that not everything can go according to plan. If you’ve been excited about getting a tattoo, you probably can’t wait to see what the final outcome looks like. However, the healing stages don’t progress in the same way for everyone.

It’s perfectly understandable that a person would stress out if the tattoo they just received doesn’t heal the same way as their friend’s or maybe even some of the other tattoo’s they’ve received. In this article, I’m going to cover one of common, but sometimes surprising healing stages for a tattoo in which it appears to turn white.

If you’ve noticed your new tattoo has turn white or “milky”, the good news is that it’s complete normal! It is part of the healing process, and occurs once scab forms. This is known as a milky-looking tattoo, but don’t worry, as it will surely go back to its original appearance with the right care. Read further below to learn more about why your tattoo is turning white and what you can do.

What is the Milky Phase and What Causes the Tattoo to Turn White?

The milky phase is a common part of the tattoo healing phase, and it occurs just before your tattoo is done healing. When you’re getting a tattoo, the ink passes through the dermis layer, and your immune system sees it as a threat. To neutralize the threat, your immune system begins healing the tattoo wound.

This occurs during a specific stage of the healing process. Healing follows the same order: scabbing, peeling, and then whitening (also known as the milky phase). Though it may have been unexpected and caused panic initially, the milky phase is actually a good sign that indicates your tattoo is healing properly.

You will notice your tattoo stay white and flaky for approximately two weeks. Of course, this can vary as everyone’s body heals at different speeds. For some, tattoo whitening lasts longer than expected. Meanwhile, others can get rid of it in no time and experience very little whitening.

What to Expect When Your Tattoo is Turning White (The Milky Stage)?

Once your tattoo reaches the milky stage, you will notice a few things. One of the first things you will notice is intense scab peel-off, which means the milky stage is soon to follow. Because the tattooed skin starts drying, your tattoo will discolor, growing white and dull as the scabs fall off. You will also notice the skin growing tight due to dryness. If it’s your first tattoo, this can be unexpected.

Many people start worrying as they think their tattoo’s design is fading or discoloring, but no such thing will happen. In fact, this part of the healing stage is crucial for improving your tattoo’s appearance.

The milky stage refers to the formation of extra layers of skin over the tattoo, resulting in a dry, dull, and white-toned tattoo. Once the tattoo peels, you will notice white patches that look very shiny and tender at times.

Is Tattoo Cloudy the Same as Your Tattoo Turning White?

A cloudy tattoo is another name for when your tattoo turns white. It gets this name because of the white features that accompany the hazy look. A cloudy tattoo is at the milky stage, and most people who get tattoos use this name to describe what they see on their skin.

Similarly, this happens as a result of scabbing. As we’ve already mentioned, this phase is nothing to worry about and it completely expected. As the day continue to go by, cloudiness of your tattoo will slowly go away and the bright, bold colors of your design will become evident again.

Now that you’re aware of the milky stage being a part of the healing process, it’s time to learn about essential aftercare tips. If you do experience this, it doesn’t mean you leave it on its own. There are a few things you have to do to keep your tattoo safe and prevent it from any infection.

At this stage, your tattoo has freshly peeled, so it’s highly prone to infections by bacteria. When you’re looking forward to a beautiful tattoo, that’s the last thing you need.

You might also have the urge to scratch your skin but refrain from doing so since that can lead to bleeding or scarring. Mentioned below are a few aftercare tips you must regularly follow, especially if you notice your tattoo growing white. These tips can help with the itching as well.

Moisturizing your tattoo is a must, even if your tattoo isn’t currently at the milky stage. But considering how the milky stage occurs after peeling, moisturizing should be an essential part of your aftercare routine. Your skin will feel pretty dry, which may result in itchiness. The best way to prevent scratching the skin is to moisturize the area with a medicated lotion. Make sure you choose a safe lotion with soothing ingredients. It should be free from harmful chemicals that could adversely affect your tattoo.

There are two moisturizers that I highly recommend to anyone with tattoos. The most common and well known is Aquaphor (Amazon link). Another salve/balm that is lesser know, but I really like because it’s natural is called Ora’s Tattoo Salve (Amazon Link).

The sooner you start to use a lotion, the fewer chances of experiencing itchiness. If you don’t use a moisturizer, your skin will grow drier. You may unconsciously scratch your skin due to the itchiness, causing bleeding and infection.

You have to be very careful when exposing your tattoo to water, especially during the milky stage. This means avoiding swimming pools till your tattoo has healed properly. Soaking your skin in water might seem like a good way to relieve the dryness and itching, but it will only make your tattoo worse and hinder the healing process.

It is best to stick to quick showers as you avoid exposing your tattooed skin moisture for long periods. Even when taking showers, try to keep the tattooed skin away from moisture.

Things to Avoid Doing During the Milky Process

To promote better healing and to successfully pass the milky stage, you must quit a few habits. It might seem impossible to follow such strict guidelines, but if you want your tattoo to look the best and avoid infections, follow the below-mentioned tips:

The most important thing to remember is that you should refrain from picking the skin and follow a thorough aftercare routine. With proper cleansing and moisturizing, your tattoo is well on the way towards healing quickly.