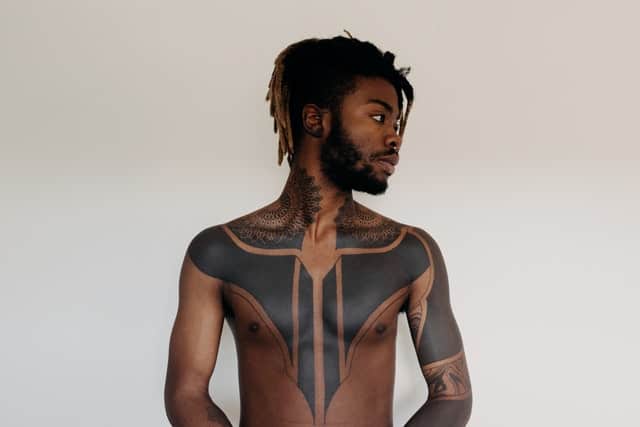 Tattoos are one of the ultimate forms of artistic self-expression and have been for thousands of years. The art of tattooing has been in dates back for many thousands of years to when warriors would give themselves tattoos to prepare for battle.

Today, the meaning for tattoos have changed significantly from those of our ancestors. Even over the past 50 years, there has been a significant shift in their meaning. Tattoos are no long a symbol of rebellion any more, but are spiritual statements, means of a special bond, and representations of personality.

The art of tattooing had a significant meaning in ancient times and still does. This unique art form will continue to evolve long after we are gone. When it comes to styles of tattoos, there is a wide variety you can pick from to keep and display on your body forever. Traditional, old school, watercolor, geometric, and 3D are just a few that come to mind.

What are Blackwork Tattoos?

There is one style of tattoos that stands out from the rest, and that is the blackwork design. Blackwork tattoos are just that; tattoos created solely with black ink. Blackwork tattoos, forever holding a title in popularity, feature massive and intricate designs. There is no limit to creativity when it comes to blackwork tattooing.

On top of being an incredible and impressive form of body art, blackwork style tattoos also have variations. The variations are tribal, Spanish blackwork, and calligraphy-style tattoos. Depending on each of these particular styles, the tattoos usually include solid shapes of black ink with patterns and designs.

Blackwork tattoos are astonishingly bold and admired. They have made their way into our modern culture simply because they have been part of the tattoo world and humanity since ancient times. The blackwork style of tattoos is relevant and has been here, part of our world and art history, for ages.

Since this style of tattooing dates back hundreds to thousands of years ago, it is evident that the blackwork style trend will not fade. Blackwork tattoos will continue to be a favorite for years to come. It is crucial to mention that blackwork tattoos have been part of various tribes and societies throughout history. The tattoos, even today, are still seen to some as a spiritual connection, a part of history, roots, and traditions.

Tattoos are more than just ink on skin. They are a vivid and wearable art form, and more often than not – they have a deep meaning to the wearer. Modern-day blackwork tattoos were commonly inspired by traditional Polynesian tattoo art. That specific style was not limited to only Polynesian and Hawaiian cultures. Those groups of people were not the only ones to flourish themselves with blackwork tattoos. A variety of styles of blackwork tattoos have also been sported in areas throughout history where the Maori people in New Zealand live, the Aztecs in Mexico, and the Borneo people in Indonesia.

At some point in time, blackwork style tattoos like the tribal designs, for example, were one of the most popular tattoo styles in history. If you know even a little about the tattoo industry, you would know that tribal-style tattoos reached a paramount height of popularity in the 1990s.

It has been quite a while since then, but these designs are still relevant today. From what we know about the history of tribal tattoos, these sometimes ancient symbols were marks of protection and power. The solid black ink on skin tattooed with perfect and precise lines and motifs; had a deep significance. The tattoos were to evoke the style, meaning, and personality of the wearer. The tattoos displayed a classic but powerful art form.

As tattoos evolve, artists persistently develop new styles based on what people want and what artists are willing to create. Blackwork tribal-style tattoos are not the only form of popular black ink body art. World-famous artists like Freddy Negrete and Ed Hardy helped pave the way for the tattoo artists of our era. They helped expose the world to styles like calligraphy, black and grey work, Chicano tattoos, and Japanese-style tattoos. As pioneers and history makers of the tattoo industry, Ed and Freddy showed the world that the art of tattooing was for everyone. They proved to society that tattoos appealed to more people than just gangs, bad boys, rebels, and punks – as many people once imagined.

In the early tattoo culture of the United States during the 20th century, tattoos were popular among military men – specifically marines and sailors. During that time in history, tattoos in many places were illegal. Times have changed now and for the better. In this day and age, people from all walks of life can have tattoos that tell the stories of their lives displayed artistically on their skin.

While it seems that tattoos have long been a part of human history, it can be almost impossible to pinpoint the exact origin of tattoos. As mentioned previously, according to historians, tribal blackwork tattoos can be traced back to the primal art forms of the Polynesians. There have also been reports throughout history of tribal tattoos rising in popularity in Western culture.

The earliest instance of this matter took place during the 18th century when sailors inhabited the Pacific islands. Impressionistic designs mixed with whirls of black ink that contoured the body are a style commonly seen in blackwork tattoos. As people evolve, so does art.

Over time, the creative and beautifully intricate stitch work known as blackwork became a tattoo style. By the 1600s many people appreciated and loved the complicated yet appealing compositions of blackwork. Spanish blackwork was often created with mazelike floral patterns and geometric designs. Those patterns and designs now have their special place in the tattoo world.

Sophisticated and precise techniques are also a common theme in calligraphy blackwork tattoos. Calligraphy is considered a visual art in the form of words and writing. It is truly no surprise that tattoos containing lettering have made their way into the tattoo traditions and cultures of the world.

The letters of blackwork calligraphy are usually seen as bold statements. They also have a bit of delicacy about them. The black ink in calligraphy tattooing is used for outlining and shading. This makes the entire tattoo pop and stand out, no matter where it is placed on the body. Cursive and block letters are the two most popular kinds of blackwork calligraphy tattoos. If you decide to choose a tattoo with lettering, the tattoo must be readable, so keep that in mind.

One of the most common questions about blackwork tattoos is: Will the ink turn green? Black ink is the last color of all colors to fade or turn into a different color. However, yes, your tattoo is going to fade over time.

Despite this truth, it does not mean your tattoo should fade and turn green or vanish from your skin in just a few months or a year. Most tattoos will only fade over decades, which is why if you are serious about your tattoos, you should plan to get regular touch-ups to keep them looking bold and clean.

Our skin faces the sun, the weather, water, and sheds naturally, so it is normal for tattoos to fade over long periods. The best thing you can do is keep the skin moisturized and take care of yourself to have your tattoo in pristine condition for as long as possible.

How Much Do Blackwork Tattoos Cost?

Generally, tattoos with color cost a bit more than black ink tattoos. If you are curious about getting a tattoo it is best to contact your local shops about pricing. They can give you a price idea for whatever you are looking for concerning your next tattoo.

Your local shop will also be able to give you a suggestion on the cost of different styles. As a rule of thumb, most shops will charge a deposit and you will be expected to pay around $100 per hour as a start. It depends on the nature and style of the work, and what your budget is. Depending on the complexity of the design, you will be required to pay more or less. The majority of my tattoos or ones that my friends have ranged in price from $100-$1000 and are small to large.

Keep in mind that in most cases, you will get what you pay for. Some artists charge more because they are more experienced. The artists who are more experienced tend to have a better understanding of their customer needs. Be sure to check the reviews of wherever you plan to go to get your tattoo. Whether you choose tribal, calligraphy, or Spanish blackwork – make sure the design and meaning of the tattoo are important and special to you and your story.

A post shared by WHITE on Black Tattoo (@whiteonblacktattoo)

A post shared by BLACK on Black Tattoo (@blackonblacktattoo)

A post shared by WHITE on Black Tattoo (@whiteonblacktattoo)

A post shared by BLACK on Black Tattoo (@blackonblacktattoo)