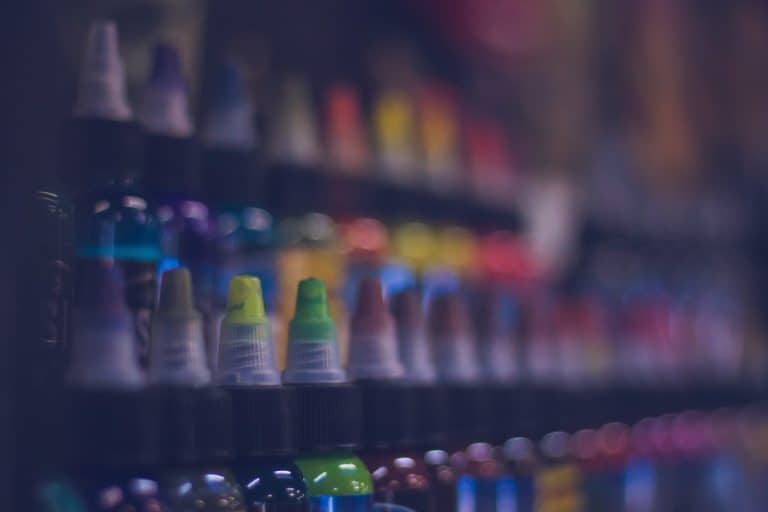 Tattoos are a popular form of self-expression, but vegans may hesitate before permanently inking their bodies. They don’t want to end up with animal products etched into their skin forever. Fortunately, you don’t have to compromise your principles to get tattooed.

In 2021, the majority of tattoo ink IS vegan; however, some non-vegan tattoo inks are still around, and they may contain bone char, animal-derived glycerin and gelatin, among other non-vegan products. If you want a vegan tattoo, be sure to select a vegan ink, as well as vegan transfer paper and aftercare products.

In this article, we’ll discuss the differences and similarities between regular inks and vegan inks, from ingredients and safety to cost and longevity. We’ll also address some of the other concerns vegans may have about getting a cruelty-free tattoo.

What Ingredients are in Regular Ink vs. Vegan Ink?

There are more than 200 colorants and additives used to produce tattoo inks. Regular and vegan inks can actually share many of the same ingredients, with some differences. Some traditional black ink gets a color boost from bone char. Other non-vegan ingredients may include:

That being said, these ingredients are far less common than they used to be, because most tattoo inks on the market today are vegan. Vegan inks replace animal glycerin with vegetable glycerin. Other ingredients used in vegan tattoo inks include:

In the past, many ink companies kept their ingredients completely secret, and those ingredients were largely unexplored by the FDA. Fortunately, the standards have shifted slightly over time, and today, the majority of tattoo ink is vegan-friendly.

Here are some of the reasons why vegan ink may be safer than regular ink:

However, there is currently no definitive data to back up claims that vegan ink is safer than regular ink. It is likely that most of the complications that come from getting a tattoo, like allergic reactions and skin conditions, are associated with chemicals, not non-vegan products. A 2016 report from the European Commission Joint Research Centre proved that 95% of adverse cases were chemical-related, and same these chemicals are found in both vegan and non-vegan tattoo ink. In summary:

Of course, vegan inks are certainly not more dangerous than non-vegan inks. The best thing you can do is spend time on your own research. Find out how your ink of choice was made, which ingredients were used, and what kind of testing and regulation it was subjected to before distribution.

Although vegan ink isn’t proven safer than other inks, there are inherent advantages to vegan tattoos, including:

Seeing as most leading tattoo ink brands have switched to vegan ink, it seems apparent that there are plenty of advantages to vegan ink over traditional ink. Most importantly, vegans will not have to compromise their beliefs to get tattooed.

What Brands of Tattoo Ink are Vegan?

Most brands of tattoo ink are vegan nowadays, but some inks still contain non-vegan additives. Here is a helpful starter vegan-friendly inks:

This is not an all-inclusive list, so be sure to do your own research before choosing another brand of ink.

Remember, even if you choose a vegan ink, that does not guarantee a fully vegan tattoo. That’s because there are multiple processes that are involved in tattoo creation. If you are vegan, you may want to review the ingredient list for the other products that are used in the tattooing process which can include: moisturizing strips, disposable razors, transfer paper, lubricants, soaps, and tattoo aftercare products. Surprisingly, many of these products contain animal-derived additives.

It’s not uncommon for major cities to have multiple vegan tattoo studios for you to choice from. If your city or town doesn’t have a vegan studio, you can ask you can talk call around to local studios and artist to see if they use vegan only products. If they don’t, they can probably substitute them for an additional cost. Some good vegan brands include Dr. Bronner’s, Lush Cosmetics, and Wild Rose.

If you would prefer to avoid the confusion and instead go to an all-vegan tattoo parlor, do some research on vegan tattoos in your local area. In the meantime, here are some of the top vegan parlors in the world:

Sea Shepherd Tattoo: Sea Shepherd is actually a famous marine wildlife conservation organization located in Amsterdam, but it is the home to a small vegan tattoo shop. What sets this parlor apart is that profits from the tattoos support ocean conservation, and most tattoo designs are ocean-related.

Gristle Tattoo: Located in Brooklyn, New York, Gristle is not only one of the most popular vegan tattoo shops, but also an art gallery. They host local animal rescue fundraisers and pet adoption events, and provide a 100% vegan tattoo process along with outstanding designs.

Down to Earth Tattoos: This all-vegan studio is located in Melbourne, Australia and features some spectacular animal designs. These artists provide all kinds of custom designs and styles, and promises a vegan promise from the stencil paper to the aftercare.

How Long Do Vegan Tattoos Last?

Vegan tattoos last just as long as non-vegan tattoos. Vegan ink has all of the ingredients and stabilizers necessary to create a reliable, long-lasting tattoo. The durability of the ink has more to do with the specific brands and colors you choose. Select a high-quality ink, and be aware that black and gray tattoos last better than color tattoos.

In order to make your tattoo (vegan or non-vegan) last for life, proper aftercare and protection are essential. Here are some suggestions for vegan aftercare:

Regular cleaning: During the healing process, it is critical to keep your tattoo as clean as possible with gentle, anti-bacterial, vegan soaps twice each day. Pat the skin dry immediately after washing.

There are two tattoo balms that I recommend to all of my customers and friends that are vegan. The first is a balm called Hustle Butter (Amazon link) and the other is a tattoo salve called Ora’s Amazing Tattoo Salve (Amazon link). You can’t go wrong with either.

Surprisingly, vegan tattoo ink is not necessarily more expensive than non-vegan inks. Considering that most inks are now vegan, they set the standard for the cost of a tattoo. Many tattoo parlors don’t even announce whether or not their inks are vegan, and you may not even know what type of ink you’re getting unless you ask!

The national average cost of a tattoo is $250, according to Fash, and this includes vegan and non-vegan tattoo options. Your cost is less dependent on the vegan or non-vegan ingredients, and more dependent on factors like:

Overall, vegan inks and non-vegan inks share similar costs, side effects, and aftercare requirements, but vegan ink allows people committed to a vegan lifestyle to get tattooed, too.