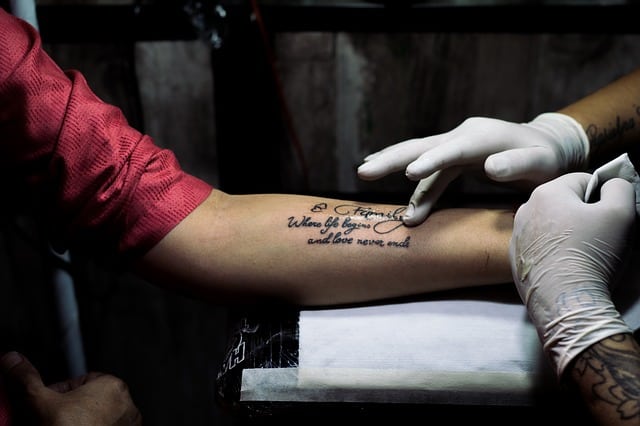 Often when getting a tattoo, especially for the first time, it can be a bit of a daunting process. There is a lot to learn, about how to choose a tattoo that is right for you, a reputable tattoo artist, and even the healing of a tattoo. Often the healing process of a tattoo is sore, depending on several different factors.

How long should a tattoo be sore? For many who are for the first time getting a tattoo, this is a common question. You may have just gotten you first tattoo and are worried that something may have gone wrong. Tattoo soreness is generally to be expected and on average should last two to three weeks, though soreness can last longer.

Tattoo soreness is expected with tattooing, remember that what a tattoo is are needles penetrating skin to leave a lasting and colored mark resulting in an image. In its essence tattooing is a light form of scarification. There are a few different factors that will help determine about how long you can expect a tattoo to be sore for.

Why do Tattoos Get Sore

Tattoo get sore because tattooing causes light trauma to the skin. What you have is a series of needles that are stacked or rather soldered together in different arrangements penetrating the skin rapidly. Depending on whether the tattooist is doing lining work or shading work these needles can penetrate your skin at a rate of 7 to over 10 times a second. 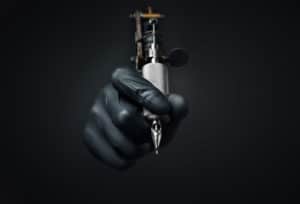 While many may not consider this to be trauma, in the general of the term, it is dermatologically damaging the skin. This trauma caused by the rapid needle movement, coupled with ink in the needles, is what allows a tattoo to be performed. While not scratching, a term used often for tattooists that prefer to hand-poke their tattoos, it is essentially what is occurring.

Tattoo needles do not needle to penetrate very deeply at all in order to leave a solid line or color. Actually, a depth of 1mm of penetration is really all that is necessary in order to get solid work. Even still, with this very minute amount of penetration, tattoo have a tendency to be sore for a good while after the tattoo is completed.

Your tattoo can be expected to be sore for at least two weeks, maybe less, maybe a little more. This soreness is expected. It may not heal evenly, leading to prolonged soreness in some spots, but depending on the tattoo and tattooist, also to be expected.

Often, a healing tattoo will feel like a light sunburn. Especially if the tattoo was applied correctly. One of my mentors of tattooing, Vinny ‘Kitten Paws,’ Is well known amongst his peers and clients for his very light touch. Many clients would often barely notice that he was working while he tattooed.

Vinny’s light touch is a perfect example of appropriate application when tattooing. His machines were tuned properly, and his application of technique was perfect in order to cause the least amount of trauma to the skin while still getting fantastic lines and colors. Tattoos from a person of this skillful caliber often are not sore for more than a week and a half, healing cleanly and evenly.

Even so, some clients of his, one of my friends, asked me why he had a spot on a tattoo that was still sore. After taking a look I was able to identify to reason. That one spot on his tattoo was an area that had to be worked on a little more thoroughly, meaning that Vinny had hovered over it with the machine just a little longer than the rest of the tattoo.

That being said, tattooing is a fine motor skill and several factors play into the healing process and its associate soreness:

How Can You Ease the Pain

Treating the soreness of a tattoo is a bit of a tricky question to answer. I personally just tough it out because I am rather dubious of placing any kind of chemical agent on a healing tattoo. I prefer to let the body just run its natural course of healing and reduce the number of factors that may lead to the ink being pulled out.

A few things of what not to do:

If you absolutely have to be a total cherry about it, then I suppose you could apply a dermatological ointment like a topical cream. But don’t be a daisy, you are a human. Psychological fortitude! Have some!

I will not apologize for the sass.

Okay, so beyond just your average tattoo soreness this is a topic that does need to be addressed with medicine. Part of the process of tattooing is the tattooist doing his or her due diligence to ensure that the client is in the cleanest environment possible. 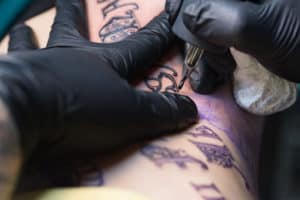 That being said, and as a former medical profession, there is no such thing as a sterile environment unless you happen to be in a surgical operation room, even then with HEPA filters and a positive pressure room, microbes are still present.

Staphylococcus is one such microbe that lives in the air, not only that, but it is already on your skin right now. There is virtually nothing you can do to completely remove it.

Infections happen, and if you happen to be very unlucky to develop an infection it is important to address that issue with haste.

Infections are generally pretty rare with tattoo from reputable tattooists, remember that this is very nominal trauma. They do still happen. A good rule of thumb after a tattoo is to avoid areas with a high load of biological contaminants, such as hotels, hospitals and public bathrooms.

Additional Reasons a Tattoo may be Sore

One more thing, especially if you are new to the tattoo world. Different inks are made with different materials, if you happen to be allergic to something in an ink you may have a reaction.

While often not anaphylactic your reaction could:

Depending on your reaction, you may want to see medical attention. Anaphylactic is nothing to play around with.