For many years, people have been using tattoos as a means of a unique cover-up, other than something just symbolic. Everyone has a different reason for getting a tattoo, and the next reason you get one could be to cover up a birthmark. Most of us have birthmarks that start to fade as we grow older or stay on our skin forever. These marks may appear as discoloration on different parts of the skin.

If your birthmark isn’t prone to any health complications, your tattoo artist will most definitely offer a cover-up tattoo for your birthmark. However, are tattoos over birthmarks a safe thing to get? Well, this is one question that should be on your mind. Many health professionals believe that you should avoid tattooing over a birthmark, though many tattoo artists still continue to offer the service. To learn whether or not a tattoo over birthmarks is the ideal thing to do, read further below.

Why Shouldn’t You Get a Tattoo Over Birthmark?

As mentioned earlier, tattoo artists can offer to tattoo over your birthmark. They consider it to be totally safe, but on the other hand, medical health professionals believe that getting one involves incurring a major medical risk.  One of the main reasons doctors believe it’s risky to get a tattoo over birthmarks and that there are many consequences attached to it.

Medical research indicates that birthmarks with a discolored appearance are a sign of melanoma formation. The formation happens under the skin and is a type of cancer that occurs due to the uncontrollable growth of melanocytes and pigment-creating cells. Of course, a birthmark doesn’t necessarily mean that there is melanoma forming under your birthmark, but there is a major chance you’re prone to it. 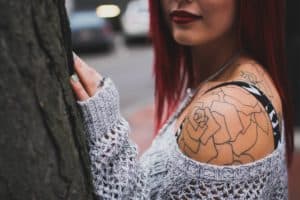 once you have a tattoo over your birthmark, it’s going to get tougher to detect anything. So, if sudden discoloration appears after you get a tattoo, the melanoma formation might grow worse and put you at a greater risk as it won’t be easy to detect it this way.

To detect if there is any development of melanoma once you get a tattoo, you will have to go for a tattoo laser removal procedure. However, by getting this procedure, you only lighten the birthmark, making it even harder to spot an issue. Laser usually removes pigmentation as well, so if there was any irregular pigmentation of your tattooed birthmark, health professionals wouldn’t be able to detect it after laser removal.

With numerous medical conditions attached to tattooing over a birthmark, tattoo artists still continue to offer the service for customers. But this is your decision, and if you want to keep yourself safe, you must, at all costs, avoid getting a tattoo over your birthmark.

Do the Consequences Apply to Moles, Freckles, etc.?

Tattooing over moles isn’t safe at all. There is a certain extent to which tattoos over birthmarks are accepted, but for moles, it’s a straight-up no. There are a few reasons why you shouldn’t get a tattoo over your mole. A mole is a small clustered growth that includes melanin. Melanin is the pigmentation in our skin cells that gives us our color. Moles have different appearances, such as being raised or flat and come in varying degrees of colors.

The most common moles are round, but sometimes, they can appear in abnormal sizes. No matter what type of mole you have, whether it’s atypical, congenital, or acquitted, it’s prone to becoming cancerous. This becomes more susceptible when there is more exposure to sunlight.  Your moles include a bunch of melanocytes, which is the number one reason for melanoma formation.

Sunlight is the biggest trigger causing melanocyte reproduction, and when this happens, your moles start changing in size and color. If you notice constant changes, it indicates a major health

complication, which will only get worse with a tattoo over it.  A few moles changes you should keep a lookout for include color variations, the border of the mole, size, and symmetry to see if the sides match each other.

These changes are major indicators that something is wrong, so if you get a tattoo over your mole, you won’t be able to note these changes. It may become untreatable before doctors even suspect something.

Another reason getting a tattoo over a mole is dangerous is due to excessive bleeding. Bleeding is a common phenomenon that happens during a tattooing procedure. But when a mole is involved, things can get messier. If your tattoo artist accidentally punctures your mole with the tattooing needle, you can expect excessive bleeding. This is going to make it difficult to get rid of the blood, and you might not even be able to continue with the tattoo procedure.

Tattoos are quite expensive, so if you plan to get one, you would obviously want it to look its best. A mole reduces the quality and appearance of the tattoo, especially if you’re adding color to it. The mole will only cause your tattoo to look more pigmented, and you won’t even be able to notice the colors. It can also make it difficult for tattoo artists to tattoo properly; they won’t be aware of how much color is showing.

If you still want to get a tattoo on the area where your mole is present, you should opt for a design that allows you to tattoo around the mole rather than over it. This puts you at lower risk and won’t damage the mole. The other best option would be to surgically remove the mole, especially if it’s cancerous. After this, you can get a tattoo in that area. It will help cover scarring due to the mole removal procedure.

Unlike moles and birthmarks, you can get a tattoo over your freckles. Freckles are small brown spots on light skin. They form when excessive sunlight exposure causes an overproduction of melanin. These are harmless and are just an additional feature on your skin. Hence, it’s safe to get a tattoo over freckles. The skin is usually clear, and you don’t have to worry about excessive bleeding. Consequently, your tattoo artist can easily perform the tattoo procedure.

Now that you’re aware of the consequences behind getting a tattoo over birthmarks, it’s best to make the right decision by not getting one. Other than that, you could get your tattoo anywhere you like. Sure, many people want to cover their birthmark because they aren’t comfortable with its appearance. But birthmarks are a natural formation, and everyone should expect them. If you notice any weird changes on your birthmark or moles, you must immediately contact your healthcare professional before it gets too late.