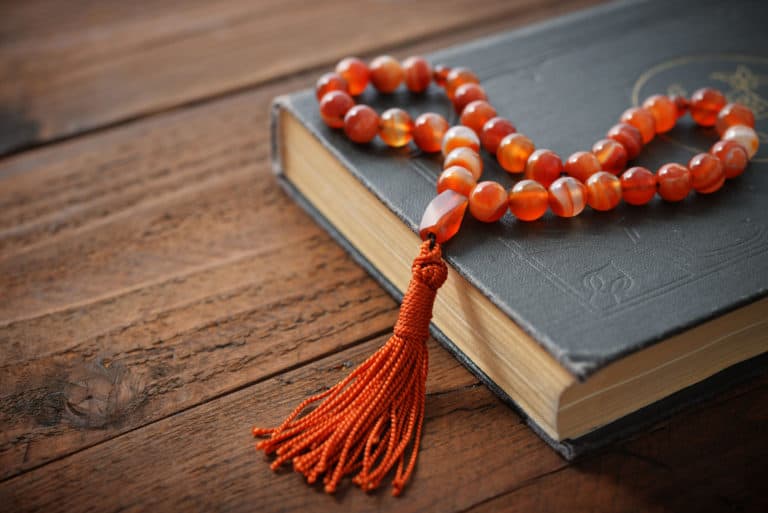 Tattoos have become more main stream in society, and people from all walks of life, regardless of gender, culture or religion, sport at least one example of body art.

But what about those believers who follow the Prophet Muhammed?   The answer, which might surprise you, depends on what teaching of Islam that one follows.  For instance, followers of the Sunni sect are forbidden to get tattoos, while the Shi’a sect is more open minded to body art.

We will look at both the Sunni and Shi’ite sects reasoning concerning tattoos in depth, along with some of the other sects of Islam in this article.  In addition, we will explore other types of body adornment and its place among the Muslim population.

Haram is defined as something forbidden or proscribed by Islamic law.  Even though there is no mention of tattoos in the Quran, Islamic scholars from the Sunni school follow the belief found in the Hadith, from Sahih Bukhari that “the Prophet (peace and blessings of Allah be upon him) cursed the one who does tattoos, the one who has a tattoo done

However, to add to the confusion, in 2017 the then Grand Mufti of Egypt, Sheik Ali Gomaa (Sunni), issued a fatwa that allowed women to have “permanent inked tattoos”.

Shi’ites are much less conservative in their thoughts on tattoos, and are generally accepting of both the tattoo artist and the canvas.   Shi’ites believe that the Quran is a complete book, and is clear about what is prohibited, and tattoos are not directly mentioned.

Writings also indicate acceptance of tattoos by Sufi Muslims, along with those who do not favor one teaching over another.

Sayyid Ali Husseini Sistani, (Grand Ayatollah Sistani), a senior Shi’ite cleric and spiritual leader of Iraqi Shi’a Muslims, ruled that “Tattoos are permissible irrespective of whether they are permanent or temporary” (Source).  Ali Khamenei, the current Supreme Leader of Iran and a “Twelver Shi’a Marja”, said that “Tattooing is not haram” (Practical Laws of Islam, ruling 1220).

The main issues with Sunni clerics seem to be the permanence of a tattoo, the pain involved in getting the tattoo, and the altering of the body itself.  Sunnis are taught that a permanent tattoo “alters the creation of Allah”.

And the pain that some experience when getting a tattoo can be interpreted as unnecessary, which is prohibited by some in Islam.   However, many tattoo artists now offer a gel or salve that numbs the tattoo area so that there is no pain.

Sunnis also question whether a tattoo allows water to reach the skin during wudo (washing or cleansing parts of the body with clean water) or ghusl (full body ritual purification with clean water).  Since modern tattoos are done below the skin, this argument is unclear within the Sunni sect.

What about temporary tattoos?   Again, it depends on how the Quran and Hadith are interpreted.   There are some (but not all) Sunni clerics that do not accept temporary tattoos of any kind, however many Muslim cultures have been using Henna dye for special occasions and celebrations since the time of Muhammed.  In fact, skin dying is accepted by almost all Muslims, except for those very strict interpretations of the Hadith.

Dar al-Iftaa Al-Missriyyah, an Egyptian Islamic educational institute (and the primary issuer of fatwas in the region) said, “There is no objection to getting temporary or removable tattoos which are common in our times.

There is likewise no objection to males or females getting removable tattoos which do not cause bodily harm, especially the ones which are not visible to others or made for the sake of adorning oneself to one’s spouse. ‘Aisha, the mother of the believers (may God be pleased with her) and many scholars maintained this legal opinion.” (Source)

What types of tattoos are permitted?

For those who follow teachings that permit tattoos, there are still some guidelines that many follow so they may be Haram free.   The beauty of Islamic art is the many geometric shapes and incredible scripting.   But most Islamic art does not portray images of people or animals.   The same rules apply to tattoos, whether temporary or permanent.

However, there seems to be a trend among Shi’ites of having a tattoo of Iman Ali, regarded as the heir to Muhammad by Shi’a Muslims.

In addition, any images deemed to be impure or anti-Islamic are also forbidden, along with symbols associated with non-religious people.   Some clerics have added that Quranic verses, Hadiths, and portrayals of Imams are prohibited.

Some Sunni clerics have indicated that the inking of the permanent tattoo should be below the skin (which is the common practice in the art).

Can you pray with a tattoo in Islam?

The answer is “yes”, no matter the teachings that are followed.   Most Sunni scholars note that removing a tattoo is difficult and painful, and therefore allow for repentance of the sin.   Some scholars say the tattoo should be covered while in prayer.

If a person with tattoos converts to Sunni Muslim, then all they need do is repent to Allah with sincerity, and then prayer will be considered valid.    Some Sunni clerics believe that the tattoo should be removed if it can be done safely, painlessly, and without altering the body, but, in most cases, the repentance is more than adequate.

Because Shi’a scholars already are accepting of tattoos, prayer is not an issue although some Shi’ite mosques have been known to request covering the body art.

The Arab News wrote about tattoos and prayer in 2004, saying that the person with the tattoo “should seek God’s forgiveness.”   The news outlet went on to say that once the person has repented the sin, that sin is completely erased.

Many Islamic scholars, no matter which sect they follow, say that those who convert to Islam and have preexisting tattoos are able to pray.

In most cases, the answer is no.  However, there are caveats to piercings.   Sunni clerics detail an exception for earrings and nose rings for women as a “customary form of adornment” from the time of the Prophet.   However, most Sunni clerics draw the line at any other piercings.   Some clerics also say that the piercing must not be visible to those other than mahrams (a group of allowable escorts for a Muslim woman).

Shi’ite texts are vague on the subject, but it does appear that most piercings for women are acceptable, as long as the piercing is in accordance with Islamic Law.   The culture of the area seems to be the primary consideration regarding if piercings other than ear or nose are acceptable in the Muslim community.

The Saudi Arabian scholar Muhammad ibn al Uthaymeen, a Salafi Islam, when asked about piercings wrote:  “The correct view is that there is nothing wrong with piercing the ear, because one of the aims that is achieved by that is wearing permissible jewelry.

It is known that the women of the Sahaabah had earrings that they wore in their ears. The pain is light, and if the piercing is done when the girl is small, it heals quickly“.

Piercings for men, on the other hand, are definitely haram in Islam.

To Tattoo or not to Tattoo

As with any religion, the answer to the question depends on the particular requirements of the subset of the group.   Members of the Christian Southern Baptist Church frown at dancing, while Church of Christ members don’t allow musical instruments in worship services.

There are strict guidelines for those who are devout in any religious sect.

So it goes with Islam and tattoos.   There is no one answer.  For those converting to Islam, consultation with the Imam can give you most of the answers you need.

It’s up to the individual Muslim man or woman to determine what their particular beliefs allow, and act upon those beliefs accordingly.