All religions have different views and perceptions of tattooing. Some completely forbid it, while some give you the free will to get them using your own knowledge on whether it’s the right thing to do. As far as Catholics are concerned, tattooing is not forbidden in the Catholic Church. But there are always two sides to the story. Other than a religious view, tattoos and piercings have become more of a societal and cultural norm. Many people see an individual with a tattoo and piercing differently than someone without one.

Do you want to find out more on what the Catholic Church says about tattoos and piercings, taking the teachings of the Bible and views of the Pope’s teachings in mind? You must read further below.

Does the Catholic Church Forbid Tattoos?

There is no mention of tattoos in the New Testament; hence Catholics believe that it’s okay to get a tattoo. While Catholics don’t fully disregard the act of getting a tattoo, they still don’t fully support it either and believe it’s best to stay away from it. There are a few references in the Bible that talk about how your body is the temple of God, and it’s his own creation. So, in order to show some respect, you should honor the creation of God that is your body and not do anything to it that will change the way God has created you. Honor is one of the biggest things that strike a Catholic’s mind when they consider getting a tattoo. And this is a good thing as it shows that they do care about the teachings of the Bible and the Church.

Can a Catholic Priest Have Tattoos?

There is no rule or law that suggests if a catholic priest can have a tattoo or not. But often, in different societies, people may not be progressive or approve of a priest with tattoos. Catholics usually 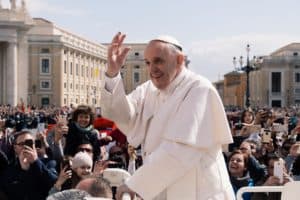 look up to the priests of the Church and follow their teachings and act. So many elders of the church might find it absurd that that holy man has a tattoo. But, to remove this stigma in the church, if priests start getting tattoos, maybe then people will have an open view about priests and members of the Catholic Church getting tattoos.

Every Catholic priest has a different view about getting a tat inked on their bodies. But the Pope believes that tattoos can help priests connect more with individuals in the church, especially with young Catholics. Pope Francis also mentioned how tattoos are sometimes an indication of faith and speak out more about an individual’s characteristics and story. This will help priests connect more with young individuals who aren’t expressive enough, especially during the time of confession.

If the Pope doesn’t have an issue with priests getting tattoos, then it’s acceptable for catholic priests to get tattoos. This doesn’t mean that a priest can show up for mass with his face or arm or any visible body area tatted. It would seem pretty inappropriate, especially to the church members, as they expect priests to set a good example for their children. There are still a few limitations that priests are expected to follow and respect, such as the tattoo type and placement.

As discussed earlier, other than the Old Testament, the Bible doesn’t talk about the forbiddance of tattoos in the New Testament. And Catholics are followers of the laws mentioned in the New Testament. This is why the Pope allows or supports priests getting tatted and also has a very open-minded approach towards it, looking at the changes in today’s culture. Back in the day, tattooing wasn’t that common as it’s today; hence, such practices were often considered shameful.

What does the Pope Say about Tattoos?

Catholics look up to the Pope for guidance and take his sayings and teachings very seriously. The Pope recently attended a conference with many young Catholics who asked him different questions. A Ukrainian seminarian asked the Pope which parts of the modern culture are good and bad. The Pope himself gave an example of tattoos by responding, “don’t be afraid of tattoos.”

He also spoke about how tattoos are a sign of belonging and help people engage in delightful conversations. Hence, people should not have to go through shame and judgment if they’re trying to express something about themselves through body art. He also gave an example of the Eritrean Christians who would get tattoos of the cross to showcase their faith proudly.

This showcases how the Pope wants the church members and the clergy to give youngsters an open space and allow them to communicate with them in different ways, even through body art. Times are changing, and while the Pope fully agrees, it is important to keep the root of Christianity in mind. Using modern techniques and interesting ways to show your faith is becoming a trend, especially among the young generation.

How can Catholics get Tattoos the Right Way?

Other than the religious point of view, many people refrain from getting tattoos due to the health complications that can occur and sometimes become a regret. If you regret getting a tattoo or don’t like the design, you have to go through the removal process, which is quite painful and puts your body in a state of shock. It would be best if you kept in mind a few things as a Catholic when 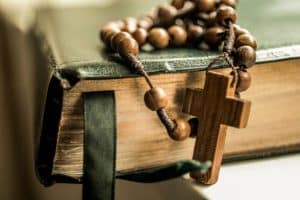 getting a tattoo, like the meaning behind the tattoo and the design.

Some tattoos are quite explicit and may be quite displeasing and disrespectful to God and the people around you. Now that you have the freewill of getting a tattoo as a Catholic, you must not misuse this freedom. When selecting a design, it’s best to be as discreet and responsible as possible. Christian tattoos are quite common, especially those that include the image of Jesus.

Some tattoo designs include disrespectful symbols and wordings along with the cross and the image of Jesus. It would be best if you stayed away from these as this will showcase you as disrespecting your freewill of getting a tattoo as a Catholic. You don’t want to portray your religion negatively, especially through body art.

You should keep in mind the placement is another important factor, especially if you’re getting a religious tattoo. Some people get tattoos of the cross or Jesus on their legs, feet, and back, which is a major sign of disrespect. Going all out with your tattoo and getting the whole crucifixion scene tatted on your entire body is also quite immoral. No matter what you do, it would be best if you always learned to keep a few boundaries, and this especially applies to you when you’re getting religious Catholic tattoos.

Tattooing has always been a debate among many old and young Catholics. Christianity is a religion that doesn’t focus much on sticking to the laws practiced in the olden days. It focuses more on how you live as an example of a true Christian engaged in acts like charity, love, and many more things. No, this doesn’t mean Catholics can go all out and start getting their whole body tatted or ignoring the true basis and teachings of Christianity, which is to remain sober, kind, and true to one God, who is Jesus Christ.

Many Catholics will still have different opinions about getting tattoos, but as long as you stay true to Christianity’s main teachings and have a clean heart, the rest doesn’t matter. Because in the end, God won’t judge you on your physical appearance but he will see your internal workings, that is, your heart and soul.