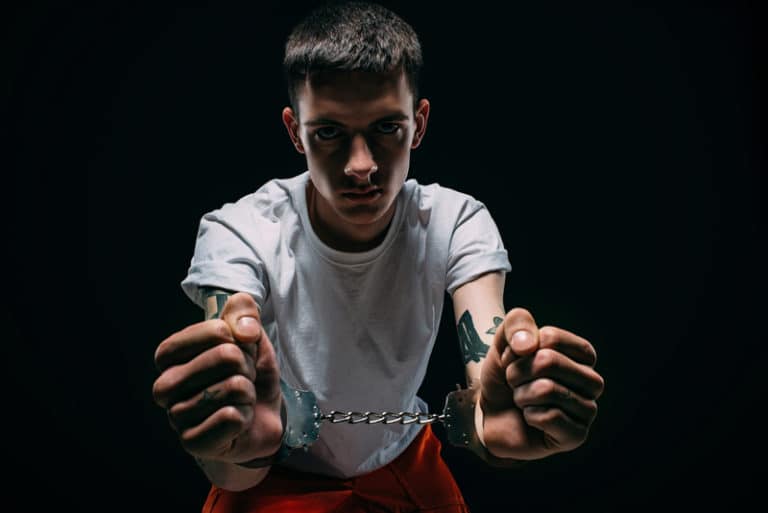 A 3 dot triangle tattoo seems simple enough, and for some, it could represent a beautiful meaning; for others, the idea of a simple triangle pattern is just pretty. However, there are plenty of reasons why one might have a negative association with this minimalistic tattoo which is why we are here to discuss this design today.

What does a 3 dot triangle mean?

A 3 dot triangle tattoo first became famous as its association with gang and prison life. For those involved in gangs, the three dots symbolize mi vida loca, or “my crazy life.” The 3 dot triangle is most common prison tattoo associated with Mexican gang members who have served lengthy prison sentences.

This tattoo is meant to symbolize the life that gang members live, constantly risking their lives living at the fringe of society. It is used to display the kind of life that the person is living and connect them to other gang members by making it easily recognizable. It is not associated with one particular gang but is simply associated with gang activity in general.

Where on the body is this tattoo usually located?

If the tattoo is meant to symbolize “mi vida loca” it is typically placed in a very prominent place. The most common place to see it is at the corner of the eye, similarly to the common tear drops tattoo, which is also strongly associated with gang activity.

If it is not placed by the eye, it is typically placed somewhere where it can be easily spotted such as on the knuckles or hands. That way it can be instantly recognized because, chances are, if you’re getting this tattoo you don’t want it to be concealed.

Is this design always associated with gang and prison life?

The short answer is no, this design is not always associated with gang and prison life, and it can be used to represent many beautiful things. However, the long answer requires a bit more of an explanation.

No, your 3 dot triangle tattoo will not necessarily label you as a gang member as soon as someone meets you, but it still could. If you choose to get your tattoo done in a typical ‘gang’ location, such as right beneath your eye or somewhere on your face, you can rest assured that people will assume the worst. Whereas if you get it somewhere less obvious, such as your ankle or the inside of your wrist, you won’t be garnering the same attention.

What Else Can It Mean?

For many cultures and religions around the world, the number 3 has a strong spiritual and religious connotation. It is considered the triad number, which encompasses all of the universe. It represents the beginning, middle, end. Body, soul, and spirit. Earth, fire, and water. The earth, the ocean, and the heavens.

In India, a three dotted triangle has ancient cultural significance. It was a traditional pattern that would be temporarily painted on the faces of the women in communities. It was mean to protect them from the evil eye. It is not quite as common anymore, but if you go to rural areas in India, chances are you’ll still see some women wearing it. The difference here is that it was rarely tattooed, it was simply placed with makeup that would be washed off at the end of the day.

Another, the meaning for the triangle tattoo is as a symbol of strength. The triangle is also known to be the strongest structure. If you were ever tasked with building something out of popsicle sticks in middle school, you likely know this. In architecture, triangles are known to be the strongest shape, one reason that many houses have triangular roofs. A triangle tattoo can be a symbol of strength and resilience that you will keep with you forever.

What does this design represent within Christianity?

Within Christianity, the number 3, and symbols of three, such as triangles, have possessed much meaning since the conception of the religion.

God is thought to be one all powerful, spiritual being composed of three parts: the Father, the Son, and the Holy Spirit. They are often referred to as the trinity and are occasionally represented in triangle form. In many examples of religious art,, you see a triangle symbol with a dove, the symbol of the Holy Spirit, flying above the triangle.

Knowing this, it is easy to understand why some Christians may want this tattoo. It has three dots, representing the three parts of God, and they are brought together in a triangle symbolizing unity.

The trinity is also one of the most common meanings for this tattoo, although it is lesser known than “mi vida loca,” an very drastic contrast to the more sinister meaning of this tattoo.

Is it okay to get a 3 dot triangle tattoo?

Yes, in the end, it is okay to get a 3 dot triangle tattoo because there are several different meanings associated with it. It is not a tattoo that anyone is going to find culturally offensive or be regarded as racist, sexist, homophobic, etc. However, you need to be aware that you may be perceived in a negative way by those who know the association between the tattoo and gang lifestyle and prison life.

If you do choose to get this tattoo, carefully consider where you get it as that will greatly help to take away from the negative connotation. For example, consider getting it on your ribs or your shoulder, somewhere that is typically concealed. That way it isn’t the first thing people notice about you, and most definitely don’t get it on your face.